As of 515 am PDT… Paso Robles Airport has received 1.16 inches
of rain so far today… with nearly one inch of that falling in
one hour. This breaks the record daily rainfall for this date..,
July 19th… which was 0.01 inches set in 2012. It also sets a new
record for the most rainfall on any calendar day in July. The
previous record was 0.58 inches on July 9th 1950. In addition… this
rain brings the total rainfall for July 2015 so far to 1.24
inches… making it the wettest July since records began in 1948. In
the previous wettest July… July 1950… 0.59 inches of rain was
recorded.

– posted originally by Stacey Warde of The Rogue Voice, http://www.theroguevoice.com

The storm that moved through here last night was in-tense. It was a long night. Thunder and lightning flashed and pounded for several hours. Some of it so close it sounded like a giant zipper was tearing open the sky. These tears would end in such jarring rumbles, they reminded me of the first jolt of an earthquake.  I’ve lived in California all my life, and I haven’t seen anything like it here before.

I don’t especially love thunder and lightning. Big storms make me feel nervous and vulnerable and like maybe spontaneous combustion of me could happen at any electrically charged moment. 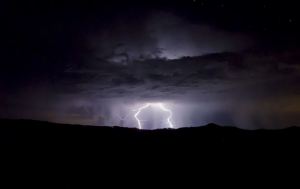 As the storm gained strength outside, anxiety formed its own front and moved into my chest cavity and stomach. There was no use trying to lie in bed any longer. I got up and scuttled into the dark bathroom. I poop when I’m nervous and last night I was nervous. Afterward, I sat on the floor in my bedroom with my nervous pup panting and shaking in my lap.

I rubbed the coarse hairs on his little chest and tried to think back to where my unease of thunder and lightning began. I leaned forward slightly and winked my right eye closed so his little warm darting tongue could clean my lashes, and flashed on sitting at the foot of my mother’s hospital bed not long before she died. I was seven, she was thirty seven. I could plainly see myself perched on a footstool in her small bedroom, situated off of her parents’ kitchen. I was seated there, doing my best to hold my arms out from my body. Earlier in the evening I had gotten a glass thermometer out of the medicine cabinet so that I could take my temperature. I often felt sick. I worried I would die before I even understood that that was my mother’s fast approaching reality. I had broken the thermometer in my hand before I could use it. I remembered at some point being told that the mercury inside was poisonous, and though I was pretty sure I hadn’t gotten any on my skin, I was being extra vigilant by not letting my hands touch my body – just in case. I guess I was too afraid to realize that if mercury was on my hands, it made no difference if I got it on any other skin on my body.

My mother noticed something was up and turned from the show playing on her small dresser top television to look down the length of her bed at me. In the darkness her eyes softened and her head tilted, “What are you doing?” she asked. My throat tightened and ached as I recalled the tenderness in her voice. I was eager to explain what had happened. I was afraid and I wanted her to make me feel better, reassure me that I wasn’t going to die from mercury poisoning. But when I started to speak, lightning startled us both as it flashed through the windows behind her. In the brightness I could see the mustard yellow and white knit cap on her head and the dark half moons under her eyes. Then the thunder boomed, taking away my words. She hadn’t heard anything I had said and I didn’t know how to begin again. Soon after, she fell asleep. I sat quietly in her room, under the tv glow until my grandparents came home and found me there. They put me to bed. I cried until I fell asleep, lightning illuminating all the colors in the stained glass windows of the guestroom where I slept at the end of the hall.

Another bolt lit up the sky and I was brought back to the present as the plug in my bathroom let out a small hiss. Rattled, pretty sure I was headed for combustion after all, I started naming things for which I was grateful. That shifted me into a more relaxed state as I took solace in the rain, my this-too-shall-pass mantra, and the crickets.

Every time the thunder would back off, I would hear crickets faithfully playing their tune over the soft backdrop of the rain. It reminded me of something I had read once about how the musicians on the Titanic had all perished with the ship because they stayed to play music as long as they could to keep all of the passengers calm.

The crickets were bringing me a sense of calm. I often meditated on them at night by focusing on their song in an effort to let all my other brain trash fall away. I was grateful that they played this night, while the storm unmoored me.

It felt like it may never happen, and just when I thought maybe I couldn’t take another flash or bang, the sun did start to rise. The sky looked a little less ominous as the first little hints of light filtered in behind the clouds. My rooster – the faithful Pep-a-chew – started to crow and that’s when I knew I was probably going to live. No mercury poisoning, no spontaneous combustion. I crawled back in to bed and slept until the sun was high and everything was quiet.