When I was three, my brother got me to jump into my aunt and uncle’s pool by telling me I knew how to swim. I have only a flash of a memory of falling through the water and then wanting to breathe but only seeing little bubbles rising above my head in the dark water. An older cousin pulled me out before the adults around the pool really knew what had happened. Afterward, I remember standing in my underwear in front of my mother. She dried me off as I cried.

Sal also taught me how to ride a bike. We lived with my maternal grandparents by then and they had a tangle of old bicycles on the side of the garage. All the kids and grandkids that came before us seemed to have left one behind there. I picked a bike that looked small enough for me to ride, and we walked over to the church parking lot. It was a girl’s bike with a cracked vinyl glittery banana seat. Each handlebar still had a few silver tassels outcropped on each end. The church lot was two houses over on the corner and usually empty during the week. We found it that way when we got there. Paved smooth in black asphalt, it had plenty of room and a ramp that came off of the back door of the building and fed into the lot.
Sal explained how you have to peddle right away or you will fall over. That didn’t seem so hard.  He looped around the lot while I stopped and started, trying to balance my momentum.  Eventually I was able to follow him for short spurts before keening to one side and tipping myself over.

At dinner, I was eager to tell my grandparents about my big news: I was officially a bike rider. “Let’s wait until after dinner and you can tell your mom too,” my grandmother suggested. I rushed through my food, but each mouthful seemed to be replaced by another. Finally I had eaten enough that I could be excused from the table. I went straight to my mother’s room.

Our grandparents owned a very big house. My brother and I shared a bedroom upstairs, my mom stayed downstairs in a room off of the back of the kitchen. A room originally meant for house staff quarters. It was big enough for her hospital bed and all the supplies the night nurse needed. My mother had come to look so different. An array of colorful little knit caps replaced her thick, dark hair. My grandfather would joke with her that they kept her brains warm. Her skin was different too, a sallow undertone muted her natural olive coloring. Two half moons of dark skin sat permanently under each of her eyes.

I was triumphant when I got to my mother’s side. “I learned how to ride a bike today—Sal taught me,” I announced, and climbed up on the foot of the bed to wait for my grandmother. “That’s great!” I liked when she looked at me, as she did now with a tender smile on her face. My grandmother came in then with a plate for my mother. She fed it to her in a patient succession of small forkfuls and listened as I recounted the afternoon. I told them how I learned to stay up while I peddled and how Sal was going to teach me to go faster and how to stop.

The next day Sal and I headed back to the church to pick up where we left off. That’s when he told me that bikes don’t have brakes. Tipping over or crashing into something, he said, were the only ways to stop a speeding bike. He also told me that the first day I hadn’t been going fast enough to need to know such things, but now I would have to learn to be on the lookout for a fitting crash spot when I wanted to get off my bike. I scanned the lot as I started riding. The perimeter fence was completely lined with rose bushes. I could either hit the side of the building or aim for the fence and let the roses break my fall.

My first crash-stop went pretty well. I had been riding around for quite a while and was ready to see if I could do it. My brother promised to watch, so I gave it a go. I hit the bushes pretty much straight on and most of the front of the bike caught the limbs and thorns. I got just a couple little cuts on my shins. It really wasn’t so bad.

I spent the rest of the afternoon trying to perfect my technique. I had it down to where I could almost always hit the bushes without hitting the fence and that would bounce me back a little, and that, for the most part, kept me from snagging into the thorns.

We spotted my grandfather turning down the street, coming home from work. I waved to him and he pulled over outside the lot and got out of the car. “I know how to go fast and stop now,” I called out from where I was riding. “That’s good! Show me!” he answered as he waved.

I started with a few figure eights and then went up and down the ramp a couple of times.  As I glided back down into the lot I started to look for a grand finale crash-spot. I liked the corner across from the broad side of the building. I headed for it and tried to keep my front tire as straight as possible. I made contact at more of an angle than I realized and scraped my arm through some thorns before coming to a complete stop.

I was getting up to inspect my elbow when my grandfather was at my side, picking up my bike and asking me if I was ok. He looked alarmed. I told him I needed to keep practicing my stops, so I didn’t get so many thorns. This confused him, so I explained what Sal had taught me.  When I turned around to find Sal, he was gone.
My grandfather brought me home, and left me in the kitchen where my grandmother sat me down at the kitchen table and cleaned my scrapes. I watched him take Sal by the elbow and walk him outside. I could hear his sharp tone, scolding my brother about how he should never have lied to me and allowed me to hurt myself.

Someone taught me how to measure out liquid morphine with a syringe and squirt it into a plastic cup with Rose’s lime juice. This would make it easier for my mother to drink down. I liked the way the plunger forced the medicine out into the thick neon juice and filled it with little bubbles that would slowly rise and break on the surface. I felt very grown up and responsible when I did this for my mom. She would would shoot down the mixture and wait for relief. 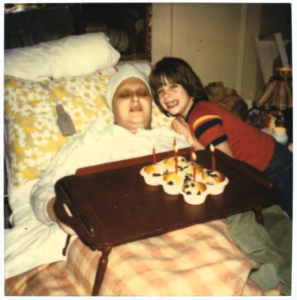 That night my mother’s two youngest brothers were coming over for dinner. They brought their girlfriends, and the kitchen filled with the sounds of cooking, conversation, and laughter. It was interesting to watch the adults. I left the table as my grandmother was serving dessert and headed towards my mother’s room. As I got near I heard her softly say to herself, “They’re having a party out there while I’m in here dying.”

Sal apologized, but I knew he wasn’t trying to hurt me. He wasn’t allowed to ride bikes with me for a while.I missed him.The next day my grandfather walked me down to the church and showed me how to stop my bike by pressing backwards on the pedals.